How To Waste Money When You Are In A Hurry

Last Friday I went to Big Lots discount store to buy miscellaneous things for the rental house. I was super happy to find a set of dishes for 8 (plates, bowls, cups, even silverware) for only $10. That was even cheaper than the thrift store. Next I dug through the pile of curtains looking for 2 matching panels for the dining room window. I found 2 and moved on. I found a fabric shower curtain to use for one of the bedroom windows. Only $8. I dropped 2 throw pillows in to the cart because they were really soft. $8 each. I went through the checkout and the only price I watched for was the dishes because I couldn't believe they were only $10. They really were so I was happy. I barely glanced at the total bill- $198.

Today, after I handed over the house to the new short term tenants (who, by the way, said "It smells nice in here". If only they knew...) I loaded the extra linoleum tiles in to my truck (because we decided to patch the kitchen floor instead of replace it, until later) and took them back to Home Depot. $190 went back on my credit card. Yea!

I also decided to take the 2 throw pillows back because they didn't match anything. I checked the receipt and they only rang up as $5 a piece instead of $8. I almost kept them but then I noticed something. There were 2 charges for $50 each. I didn't remember buying anything that expensive. The description sounded like the 2 curtain panels that I bought for the dining area. I thought it must have been a mistake so I asked the cashier when I took the pillows back. She said yes, that was the actual price. Big Lots has their own line of designer home furnishings and it is quite expensive compared to the rest of the stuff in the store. Someone had mixed the designer items with the rest of the curtains. I was horrified that I paid $100 for curtains for ONE window. 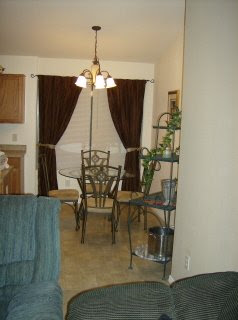 The ones in the picture are the $100 curtains. I didn't get a picture of the new ones.

I quickly found some sheer curtains of a similar color and bought them for $10 each. Then I called my new tenant and left a message asking if I could exchange the curtains in the house. I drove back to my mobile home and dug through the trash (luckily it hadn't gone to the dump yet) and found the original packaging. Then I called my tenant again, this time got a hold of him (he was setting up an exhibit and not at the house) and he gave me permission to go change out the curtains although he was a bit confused by what I was asking. He thought I was afraid he would ruin them. I said no, I just want to return them to the store. Then I stuffed them back in the package, put up the new ones (the new ones look better, the old ones made it look too dark) and drove back to the store to get my $108 refund. Whew! I'm ready for my weekend now. Please don't tell me tomorrow is Monday already.
Posted by Daizy at 7:44 PM

Considering all you had to get done, it doesn't seem like a big deal. I am still amazed at the before/after photos.

Also, it sounds like the Big Lots here. I guess people pick up one thing, find a similar item for a lot cheaper then just place the expensive one in the bin with the cheaper ones. Stuff is always mixed up in there.

At least you caught it, and had time to change it out to get your money back. Hard to do when you are most likely exhausted/over the whole thing.

It's time for you to take a deep brath and relax. It's over!

I hope these tenants are awesome and leave your house in the same condition they received it.

Spending $3,000 in a week was easy but now I'm feelig the pain and trying to save every penny. It is nice to get $300 back in one day instead of paying out $300. I don't want to spend any more money for the rest of the month.

Yes Money Minder, these people are very good guests. They stayed at the house last year too. I just hope they don't have any complaints.

You are Wonder Woman. I am amazed at all the work you have done in such a short time. Well done!

Hi there-well done on all your hard work, you really remained focused and organised throughout.