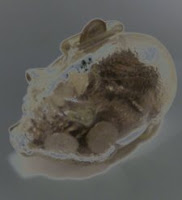 My mortgage and my 401k are just about the same amount. I briefly thought about cashing in my 401k to pay off my mortgage. Unfortunately, I read that I would lose a third of the value. After taxes and fees I wouldn't even have enough to pay it off. Plus I wouldn't have any money for retirement. So much for that idea.

Then I thought, what if I stopped contributing to my 401k for the next 2 years. How much would I be able to put towards my mortgage? I only contribute 3% so after taxes I would have about $900 a year. That sounded good until I thought about how much I would have if I left it alone. Before taxes I contribute $1200 plus another 3% from the company. I would be missing out on $4800 for my 401k. So, by stopping contributions I could pay my mortgage off one month sooner but it would take me 4 more months ($1200 x 4 months = $4800)to replace the money in an IRA to catch up. That doesn't sound very good. I had better stick with selling stuff on ebay.
Posted by Daizy at 6:50 PM