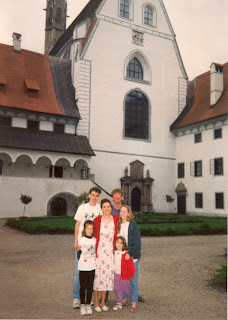 I had the opportunity to study in Austria for 2 semesters while I was in college. Coincidentally, my grandfather gave each of us grandkids $7,000 that year. He wanted us to have the money while he was still alive to see what we did with it. I remember my oldest sister talking about investing it in a mutual fund. I didn't know what those were and saving for the future was a very distant thought. Most of the money was spent on travel, food and gifts while I was in Europe. I did have enough left over to buy my first car for $700 after I graduated. If I had saved that money and invested it in a mutual fund at 10% interest, minus taxes, I would have $25,000 now. It would be nice to have $25,000 right now but I must admit that the memories that I have from those 2 semesters were worth even more than the money I spent. I think I got a good deal.
Posted by Daizy at 6:27 PM